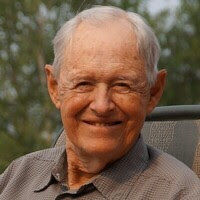 Walter was born on August 2, 1932, on a Pleasant Hill, Missouri, farm. He was the son of Alice Elizabeth (Lewis) and Walter G. Heid, Sr. Walter grew up in Pleasant Hill until 1941 and then on a farm west of Harrisonville.
He graduated from Harrisonville High School in 1950 and attended the University of Missouri at Columbia for two years. Walter then served in the U.S. Air Force for four years from near the end of the Korean War in 1952 until 1956, serving at bases in California and Japan. After being discharged, Walter returned to his parent’s farm in Harrisonville and, in 1957, met and married Barbara Ann Hess, a farm girl from Archie. They went to the University of Missouri, Columbia where Walter finished his Bachelor of Science Degree in Agriculture in 1958 and his Master’s Degree in Agricultural Economics in 1960.

Walter and Barbara then moved to Washington, D.C. where he was employed by the Economic Research Service (ERS) of the U.S. Department of Agriculture. In 1963 he was given the opportunity to move his office to College Park, Maryland, where he earned his PhD in Agricultural Economics from the University of Maryland. By this time, Walter and Barbara had three children: Leiann, Elizabeth and George.

After seven years in the Washington, D.C. area, Walter had the opportunity to work at a Land Grant University of his choice where the ERS had a field office. He chose Montana State University (MSU) in Bozeman and moved the family to Montana in 1967.
He worked at MSU on a cooperative agreement with the Department of Agricultural Economics and was an adjunct faculty member. Walter taught Farm and Ranch Management and co-authored a textbook, Grain Marketing Economics, with another University professor.

In 1975, ERS closed some field offices and Walter’s career moved the famiily to Kansas State University (KSU) in Manhattan where he continued to work for the ERS-USDA and, again, was an adjunct faculty member with the Agricultural Economics Department. During his career, Walter authored numerous research papers. He also authored and self-published four books of poetry.

In 1984, Walter took an early retirement from the USDA and was awarded the honorary title of Professor Emeritus at KSU. During his time at KSU, Barbara and all three of his children received various degrees at the University.

Following his retirement, Walter had the opportunity to work in Central and South America in various countries on nearly a dozen economic development projects. He later accepted a four-year assignment in Kenya, Africa, with the United States Agency for International Development (USAID) where Walter managed a project that helped small-scale farmers across the country improve their storage of food crops. He said this was one of the most rewarding projects he had ever worked on.

Upon their return from Africa in 1991, Walter retired (again) and he and Barbara moved to Harrisonville, Missouri, temporarily. In 1992 they moved to Donna, Texas, near Weslaco in the Rio Grande Valley, which they called home until 2012. Walter and Barbara were avid volunteers, saying that no matter how young or old, they wanted to share their time and talents and do something productive for their community. They were often found working at the Weslaco Chamber of Commerce and the Estero Llano Grande State Park and Frontera Audubon Nature Preserve.

During the summer months, they would migrate north and volunteer as naturalists, working for the National Forest Service, National Wildlife Refuge System and local nature parks. They volunteered from the Grand Canyon to Maine, and to Alaska as naturalists doing survey work, banding and counting birds and more.

Walter and Barbara were world travelers and shared their love of travel with their children and grandchildren through numerous trips. Walter was proud to have visited all seven continents, completing his final continent, Antarctica, in 2009.

Walter and Barbara’s last move in March 2012 was back to Missouri to be near their eldest daughter. Six months later Walter lost his wife of 55 years. Going solo, Walter started volunteering in various capacities with the Lee’s Summit Symphony, Lee’s Summit Chamber of Commerce and Downtown Lee’s Summit Main Street. He became well-known in Lee’s Summit as he volunteered for nearly every special event and distributed event posters to downtown businesses on a regular basis. In 2014 Walter was honored to receive the Dale Hartley Service Award for volunteer of the year. Two years later, he received the Veterans Service Award from the Governor’s office for his volunteer work.

Walter enjoyed living in John Knox Village Independent Living until moving into its Care Center in March 2020, just a week before the Corona virus pandemic lock-downs were put into place. His was a COVID-19 survivor, contracting the virus in October 2020.

During the last few years of his life his family extended to include his wonderful Simply Home Companion caregivers, most recently Casey, Christina, Charity, Kara, Stephanie and Michelle, under the guidance of Nathan. Their one-on-one care allowed him to enjoy a better quality of life and remain in independent living until his last year. The family is grateful for the wonderful care Walter received from Simply Home. Additionally, the family wants to express sincere gratitude and thanks to Kansas City Hospice House for their assistance and guidance for a peaceful and beautiful end-of-life experience. Walter died peacefully of natural causes.

A private family celebration of life will be held post-COVID pandemic in the mountains of Montana.

For those who wish to make a donation in Walter's memory, the family suggests donations to Downtown Lee's Summit Main Street, Inc. to continue support for community events and programs – something near and dear to Walter’s heart. Donations can be made by visiting downtownls.org/donate or mailing donations to DLSMS at 13 SE 3rd St, Lee's Summit, MO 64063.