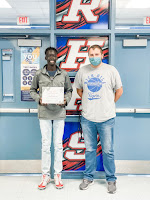 State Farm of Butler is excited to introduce our State Farm student athlete of the week Magal Chol-Case who is a sophomore for the Rich Hill Tigers. Magal had three games this past week and averaged 18 points, 10.3 rebounds, and 1 steal per game.
He shot 53% from the field, 25% from behind the arc and 69% from the free throw line. Magal was nominated by the head coach at Rich Hill Eric Moles.
He stated “Magal has stepped up as a sophomore and led the team in scoring and rebounding since coming back from Christmas break. Magal had always been asked to guard the best player from opposing teams. He is a great kid who is always working to get better.

He was also on the honor roll last semester.” When Magal was asked how he would describe an elite athlete in his own words he stated “be confident, get to know your teammates on and off the court, when things get tough try to bring them up, and try not to show your own frustration on the court.” Magal hopes to attend a small college after graduation and play basketball.

When asked what he has learned from basketball that he can take into his life after sports he said “patience....it sometimes takes time for things to develop.” It was such a pleasure meeting Magal and we wish him and the Rich Hill Tigers the best of luck as they take on Adrian tonight.
Published by Bates County News Wire on January 22, 2021