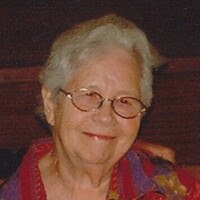 Evelyn Nadean Cummings, 93, of Harrisonville, Missouri passed away on Friday, March 12, 2021 at Golden Years Nursing Home.
A funeral service will be held on Tuesday, March 16th at 11:00 am at Atkinson Funeral Home in Harrisonville, with a visitation beginning at 10:00 am.
Interment will follow in Freeman Cemetery in Freeman, Missouri. Memorial contributions are suggested to Ascend Hospice or a charity of your choice.

Nadean was born on July 9, 1927 on a farm southeast of Harrisonville and was the oldest child and daughter of John and Ethel (Williams) Kochsmeier. She joined the Grand River Baptist Church in December 1945. On October 15, 1966, she was united in marriage to Anver Ferrell Cummings and they resided on a farm southwest of Harrisonville until his passing on September 11, 1997. Nadean sold the farm and moved to a senior citizen complex in Harrisonville after Anver’s passing. Nadean enjoyed doing word searches and coloring in her free time.

Nadean was preceded in death by her husband; her parents; one sister, Ethel Rosalie; one nephew; one step-grandson, Michael Lee Morris; and step-sons: Walter Price Cummings and Ferrell Dean Cummings. She is survived by her sister, Betty Lou Hicks of Warsaw, MO; brother, Jim Kochsmeier of Butler, MO; nephews and niece; step-daughters: Maxine Morris and Freda Cummings; six step-grandchildren; 14 step-great-grandchildren; and many step-great-great grandchildren.