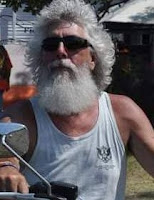 David Alan Poage, age 61, La Cygne, Kansas passed away on Thursday, May 20, 2021. He was born on February 28, 1960 in Kansas City, Kansas the son of William and Margot Kansteiner Poage.
He developed a love of mini bikes at an early age and turned that into a passion for Harley Davidson motorcycles as an adult. He enjoyed rock and roll music especially guitar music. He was a member of the Rusty Zipper Club. After high school he spent time in various places in the south.
He eventually settled in La Cygne, Kansas where he had many friends. David never knew a stranger. He was a good man with a big heart and will be forever remembered and missed. He was preceded in death by his parents.
David is survived by a sister, Debi Houseman(Ron), companion, Janet Dick, nephew, Sam Houseman(Shelby), two great nephews, Abel and Bo, and a great niece, Berkley, extended family and friends.

A motor cycle run will be held at a later date to honor the memory of Poage. Contributions are suggested to Grady's Kids, c/o Schneider Funeral Home, P.O. Box 525, Pleasanton, Kansas 66075. Online condolences can be left at www.schneiderfunerals.com.