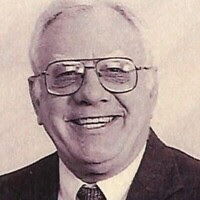 Wesley Ferrell Troutt was born in Boone County, AR on October 26, 1935 the eldest son of Clyde W. and Leona (Asbury) Troutt. He passed away Thursday, May 20, 2021. An all-state basketball star at Bergman, AR in 1953, he earned a four year scholarship to the University of Arkansas.
He attended only a short time before opting for a four year stint in the Air Force where he served as an aero-med tech. He married his high school sweetheart Esther Miller in 1956. Their son, Mark Wesley, was born during their tour at George AFB in California.

In 1958 he continued his education and in 1962 obtained his degree at Wichita State University and began his career in public accounting with Arthur Andersen & Co. and later Coopers & Lybrand in Kansas City, MO. He enjoyed a brief interlude as comptroller with C.J. Patterson bakery. In 1972 he and a partner purchased a public accounting firm in Harrisonville, MO. He later formed a partnership with Ivan (Butch) Beeman with offices in Harrisonville, MO, Butler, MO and Olathe, KS. Mike Grozek and Dana McEntire joined as partners prior to his retiring in 2004. He was a member of the AICPA and Kansas and Missouri CPA societies. He and Esther retired to Bella Vista, AR and then on to Talala and Owasso, OK to be near their son and family.

Survivors include his wife Esther of the home, his son, Mark and wife Pamela of Oologah, OK, grandchildren Justin (Angela) of Billings, MT, Kathryn (Ryder) Hill of Oologah and Jonathan (Jessica) of Oologah, and great-grandchildren Grayson, Shelby and Emma Troutt; Kellan, Gentry, Fiona and Ainsley Jo Hill; and Jackson Troutt; three sisters, Carol (Luz) Gonzales of Duncanville, TX, Helen (Terry) Wright of Blue Springs, MO and Sharon (Moe) Fatemi of Los Angeles, and three brothers, Dan (Twana), Larry (Barbara) and Mac (Renee) all of Harrison and numerous nephews and nieces. He was preceded in death by his parents, a great granddaughter Kathryn Marie Hill and a sister Marlene Karres.

Wes fought a long battle with dementia, usually with a smile and humor. Many thanks to family and friends for prayers and support through our long and tedious journey. It is now time to let go of the pain and sorrow and rejoice in his release to a better home. May God be with him.

Graveside service will be held at 1:00 pm at Summers Cemetery in Harrison, AR on Tuesday, May 25, 2021. We would appreciate memorials be made to benefit children’s charities.