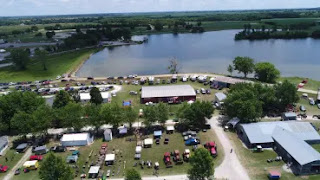 Continuing with the history of Frontier Village

1984 was a huge year for WMATMA and Frontier Village. Our 6th annual show was that year and was held on our new grounds being moved from the City Park. For the first time we were able to put something up permanent. Construction of several buildings on our new grounds were started that year and we “temporarily” called the whole endeavor Frontier Village with plans to give the little town a permanent name later.  One of the largest undertaking that year was the acquisition of a wooden two-story store building at Spruce Mo, East of Butler several miles. At the corner of BB and H highways, it had a long history starting circa 1900. It was the Odd Fellows Lodge who built it and using the top floor for themselves and the ground floor was a general store. Members of WMAT MA tore the structure down, every board and piece of trim, windows, and all. We hauled it all to the “Village” and under the supervision and planning of Don Hill, where we re-built the store but only as a one-story building. By the 1985, 7th annual show and with hundreds of donations from all over the area, the Ladies Aux outfitted the old store with memorabilia making the general store look much like it did in the early part of the 20th century.

The men and their wives put in countless hours dismantling the old building and then building it back. I remember many of the women driving the nails out of all the boards that were taken down and the loading it all on trailers. Cleaning used lumber is not an easy job! The girls also removed all the decorative square wall and ceiling tin work carefully so it could all be used to finish the “new” store. I wish I could remember and list those that worked on the huge project, but I’m sure I would leave out some names. I will say that the driving force and expertise was Don and Lillian Hill. It was worth the effort because the Spruce Mercantile Store is certainly a highlight of our living museum to this day. After completion, the ladies then added a kitchen area enabling them to serve their famous meals for several years until the present-day kitchen was built.