JEFFERSON CITY — Republican State Sen. Rick Brattin, R-Harrisonville, submitted a letter to Governor Parson today encouraging him to join other Republican governors in sending law enforcement agents to assist with border security efforts in Texas and Arizona.
“President Biden has shown that he has no intention of securing our border with Mexico,” Sen. Brattin said. ”Instead of taking this issue seriously, he has put the woefully-unprepared vice president in charge, and she has made it clear that she will not do anything to curb illicit cross-border travel. Interstate 35 is a common route for drug smugglers and human traffickers, providing a direct road into Missouri for fentanyl producers and those who smuggle people across the border. Any border security effort has a direct impact on Missouri, and this is why I am encouraging Governor Parson to help bolster state-level efforts in Arizona and Texas.”
Senator Brattin grew up in Greenwood and graduated from Lee’s Summit High School. He lives in Harrisonville with his wife and five children. In addition to owning a small construction company, Sen. Brattin also operates a 40-acre farm north of Harrisonville. He served in the United States Marine Corps as a non-commissioned officer for six years. Prior to his election to the Missouri Senate, he served as Cass County auditor and as a member of the Missouri House of Representatives.
For more information about Sen. Brattin, visit https://www.senate.mo.gov/brattin/. 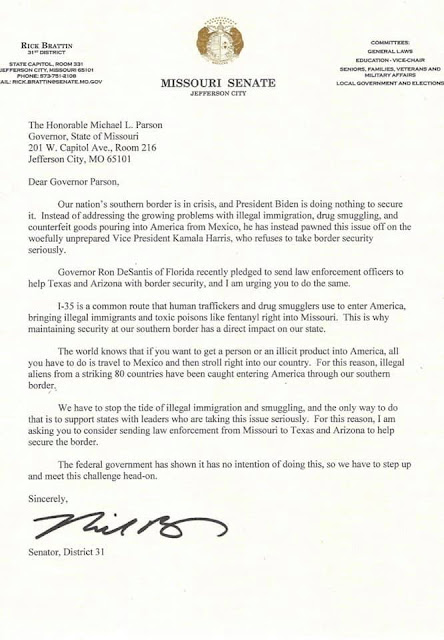