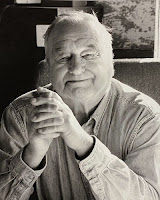 Billy Gene Rogers, 92 of Nevada, MO passed away peacefully at his home June 5, 2021. Bill was born December 29, 1928 to James William and Katie Elizabeth (Beard) Rogers, in Lincoln Parrish, LA.
Growing up in rural Louisiana, Bill helped his father and older brothers raise crops, make their own sorghum from sugarcane grown on the farm and tended livestock. Bill developed many skills on the farm including carpentry. At age 13, Bill single-handedly constructed a one room log cabin with cedar shake shingles he split with a froe.
He graduated Simsboro High and later served his country in the US Army during the Korean War from 1951-1953. Prior to entering the Army, he married Peggy Story of Nevada, MO, in 1950. Following his military service, he and Peggy began their life journey together, raising a family of three children. Bill was an excellent car mechanic and worked as a service manager and parts manager for Bray-Rogers Studebaker and Wysong Motors.
In 1980, he opened his own auto and appliance repair shop known as Rogers Repair. It was there one could count on hearing Bill's wry wit or often a joke. He was a history buff, avid Civil War hobbyist and an excellent carpenter. He enjoyed restoring old cars, building furniture and was an avid outdoorsman. He was well known and respected for his honesty and integrity as a businessman and a person. He never hesitated to help a friend or a stranger in need. This was only exceeded by his love and devotion for his family, which brought him the most joy. He was never too busy to take his kids hunting, fishing or bike riding.
Later in life, he loved nothing more than spending time with his grandchildren at the shop and the family farm. He was able to meet and hold his first great grandsons Truyn and Brett Rogers lifting his spirits to new heights. Truly, a life well-lived.
Preceding him in death were his wife, Peggy; daughter-in-law, Linda; four brothers, Edwin, Thomas, Carol and Arvelle Rogers; nieces and nephews, Elizabeth Daughdril, Terry Rogers, Lynell Rogers, John Earl Rogers and JoLinda Rogers.

A funeral service will be held at 2:00 p.m. Monday, June 14, 2021, at Ferry Funeral Home in Nevada, MO with burial to follow at Newton Burial Park.

Memorials may be made to Bushwhacker Museum or El Dorado Springs Preserve Our Past Society with the funeral home serving as custodian.