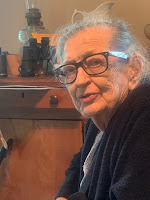 Josephine Mae Hetzke, age 87, Mound City, Kansas passed away on Monday June 28, 2021. She was born on August 14, 1933 in Waterville, Kansas the daughter of William and Hulda Kneemeyer Smith. She was united in marriage to Arthur Hetzke on April 10, 1960 in Blue Rapids, Kansas at the Baptist Church. Josephine was a member of the Mound City Christian Church. She was an accomplished quilter, having quilts all over the United States and several foreign countries. She enjoyed gardening and growing flowers.
She was preceded in death by her parents, and ten siblings, Edmund, Ben, Ivan, Clarence, Elsie, Verona, Florine, Esther, Julia and Wilma. Josephine is survived by her husband, Arthur, four daughters, Nancy Hetzke, Nanette Knight, Amy Macomber(Jerry), and Sally Orth(Robert, Jr), and four grandchildren, Brian, Mark and Sean Macomber and Gabrielle Orth.