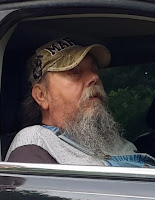 Terry Wayne Wood, age 61, La Cygne, Kansas passed away Monday, June 21, 2021. He was born in Kansas City, Missouri on September 17, 1959 the son of Dorval and Alice Teitz Wood. He served his country in the United States Marine Corp. Terry worked as a diesel mechanic. He was united in marriage to Marilyn Ledbetter on August 24, 1985 in Independence, Missouri.
Terry liked old cars, owning a 1967 Mustang, Harley Davidson motorcycles, hunting and watching westerns. He was a great storyteller and loved his nieces and nephews as if they were his own children. He was preceded in death by his parents and a brother, Kelly Wood.
Terry is survived by his wife, Marilyn, two brothers, Lloyd Upham(Kathy), and James Wood, five sisters, Sherry Hutchison, Candice Faulkner(Gari), Deborah Tierney(Larry), Brenda Gambino, and Georgia Oshel, and many nieces and nephews.
Graveside funeral service will be held 1 pm Sunday, June 27, 2021 at the Star Valley Cemetery, La Cygne, Kansas. Visitation will be held 5 to 7 pm Saturday, June 26 at the Schneider Funeral Home and Crematory, La Cygne Chapel. Contributions can be made to the Schneider Funeral Home to help the family defray funeral costs. Online condolences can be left at www.schneiderfunerals.com.