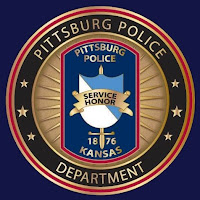 PITTSBURG, KANSAS – On early Friday morning, June 18, 2021, at approximately 1:15 AM, a law enforcement officer from the Pittsburg Police Department spotted a red 1997 Jeep Wrangler in the area of 6th St. and N. Tucker St., in Pittsburg. This Wrangler was believed to be associated with the theft of a Caterpillar Skid-steer from Thursday, June 17, 2021, in the 300 block of S. Locust St., in Pittsburg. The officer observed the Wrangler make a moving violation while turning onto E. 5th St. from Tucker, and the officer then attempted to initiate a traffic stop in the 1000 block of E. 5th St. The Wrangler failed to stop for the officer, and then began to flee from the officer heading east to Rouse St., where it then went southbound. The officer observed one of the occupants throwing what appeared to be a plastic bag from the front passenger’s side window of the Wrangler in the 1000 block of E. 5th St.
The officer, who was later joined by another officer from the Pittsburg Police Department, continued to pursue the Wrangler southbound on Rouse St. to Centennial St., where the Wrangler then began to head westbound. Deputies from the Crawford County Sheriff’s Office began to assist with the pursuit, and a deputy attempted to deploy a tire-deflation device on Centennial St. in front of the Meadowbrook Mall. However, the Wrangler left Centennial St., avoiding the tire-deflation device, and moved onto the Ron’s IGA parking lot and then through the mall parking lot, coming out onto S. 220th St. / Langdon Ln., where it began to travel southbound.
Officers from the Police Department and deputies from the Sheriff’s Department continued to pursue the Wrangler southbound on 220th St. to Pichler’s Chicken Annies, where the Wrangler then moved onto US-69 Hwy. and began to travel northbound.
The Wrangler continued to travel northbound on US-69 Hwy. back to Pittsburg, where a Pittsburg Police Officer attempted to employ another tire-deflation device at Centennial St., however the Wrangler avoided the device, and continued to head northbound on US-69 Hwy.
The pursuit continued northbound on US-69 Hwy. to K-126 Hwy. / 4th St., where a Crawford County Deputy set up another tire-deflation device. This time, the Jeep Wrangler made connection with the tire-deflation device.
The Wrangler continued northbound on US-69 Hwy., and it eventually slowed down and came to a stop just south of the intersection at 20th St. A felony car stop was conducted on the Wrangler, and both occupants were ordered out of the vehicle, to which they complied, and they were taken into custody without any further incident.
The driver of the vehicle was identified as 24-year-old William F. Johns II, of Pittsburg, and the passenger was identified as 30-year-old Zachary R. Winemiller, also of Pittsburg.
The Wrangler was towed from the scene, and during a subsequent inventory search, items of illegal drugs that are believed to be methamphetamine were located in the vehicle. Additionally, after Mr. Johns and Mr. Winemiller had been taken into custody, a Pittsburg Police Officer recovered a plastic bag from a driveway in the 1000 block of E. 5th St., which contained items of illegal drugs that are also believed to be methamphetamine.
The combined presumptive weight of the recovered items of illegal drugs believed to be methamphetamine intended for distribution was approximately 65 grams.
Both Mr. Johns and Mr. Winemiller were arrested and transported to the jail at the Crawford County Sheriff’s Office for booking. While at the jail, a small plastic bag containing items of illegal drugs that are believed to be methamphetamine was located on Mr. Winemiller’s person.
Mr. Johns was arrested for felony possession of methamphetamine with intent to distribute, felony fleeing or attempting to elude law enforcement, felony avoidance of a tire-deflation device, felony theft of stolen property and misdemeanor possession of stolen property. He is currently being held in lieu of a $28,000.00 bond.
Mr. Winemiller was arrested for felony possession of methamphetamine with intent to distribute, felony interference with law enforcement, misdemeanor possession of drug paraphernalia and for violations of parole through the Kansas Department of Corrections. He is being held without bond.
Mr. Winemiller was arrested on Monday evening, June 14, 2021, for involvement with the reported shooting incident that occurred at 10th St. and Michigan St., in Pittsburg, and the subsequent pursuit, which is still under investigation.
Later that morning (Friday, June 18, 2021), the stolen Caterpillar Skid-steer was located and recovered at an address on W. Madison St., in Pittsburg. The theft of the Skid-steer is still under investigation at this time.
The investigation into this pursuit and narcotics arrest is ongoing at this time. Anyone having information related to this incident, or other incidents, is urged to contact the Pittsburg Police Department at 620-231-1700, or at our tip line, 620-231-TIPS (8477). Callers may remain anonymous.