The Museum Minute: Younger boys might be in town... 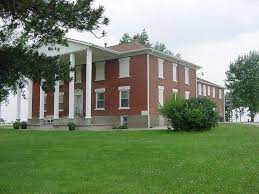 Museum Minute Presents: This Week in History (According to Herrman’s Archives)

Early Days of June in the Year….

1874 – Neighbors are speculating as to the identities of 4 strangers at J. T. Whinney’s for supper. Some think is might be some of the James or Younger bunches.
1870 – A large group of Butler boys, some sons of prominent people, are arrested for profane and obscene talk and drunkenness on the Butler square and after a night in the Marshal’s ‘hotel’, are fined $8.43 each.
1895 – Joe Heck has moved his cigar factory to the East room of the Cook building opposite the Talmage house on Park Avenue, Rich Hill.
1916 – Burn’s & Kohl’s Indoor Circus performs in Butler’s new Photoplay Theatre, George Parrish, proprietor. Also they show five reels of moving pictures.
1870 – It happened in Levy & Co store on the Butler Square. Reverend Wm Kinney ties the knot of wedlock for a couple. The bride is 15 and the groom looked middle-aged, dignified, and very happy.
1864 – Some of Bates County’s records that had been in Jefferson City, during the War Between the States, are shipped to Johnstown, as the provisional County Seat.
1903 – O. J. Radford resigns his position at the Cash Store in Butler to go into the livery business in Hume.
1892 – Missouri Governor Francis appoints General J.O. Shelby, of Elkhart Township, as Recorder of Deeds, an office vacated by the death of S. W. Douglas. Shelby says any money, over expenses, will go to the widow Douglas.
1853 – Benjamin Richardson’s ten horse portable mill, the first at Papinville, is quite popular with area farmers.
1924 – A cache of stolen whiskey is found in a burial vault in the Oak Hill Cemetery. Butler.
1917 – Miss Agnes Gassaway, an employee of the Commercial Bank of Hume, becomes the first lady Notary Public in Bates County.
1922 – The Salem Baptist church, some 7 miles east of Passaic, celebrates the 50th anniversary with a special program and dinner on the grounds.
1879 – A drove of about 1700 sheep are herded through Butler on their way West.
1890 – After delivering a prisoner to Jefferson City, after midnight, Bates County Sheriff Glazebrook checks into the Madison Hotel, saying he wanted to sleep late. About 10 am, a porter reports he smells gas coming from the sheriff’s room. Entering, hotel officials and the police find him unconscious from gas fumes. Despite medical efforts, Glazebrook dies.
1854 – Since opening his general store (between the north & south branches of Double Branch Creek) earlier this year, W. B. Young has had brisk trade, tobacco & whiskey his best sellers.