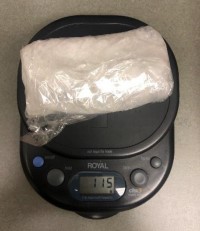 In recent months officers with the Nevada Police Department have been working alongside the United States Postal Service – Investigations Division and the Department of Homeland Security (DHS) in regards to drugs being trafficked into our community through the mail.
Officers obtained information that a mail delivery of drugs was being made to a residence in the 600 block of N. Elm Street on July 8, 2021. During the afternoon hours of July 8, 2021 officers from the Nevada Police Department, Vernon County Sheriff’s Office and Bates County Sheriff’s Office executed a search warrant at the suspect residence in the 600 block of N. Elm Street. During the search a Bates County K-9 made a positive alert on the package in question.
Nevada Police subsequently seized the contents of the package which contained approximately 115 grams of suspected methamphetamine, with an estimated street value of approximately $2,000. The evidence seized will be sent to the Missouri State Highway Patrol Crime Lab for further analysis. One female suspect was taken into custody by Nevada Police and transported to the Vernon County Jail for holding.
The female subject has been identified as follows: Dawn M. Hopper, age 43 of Nevada. On July 9, 2021, the following charges were filed against Dawn M. Hopper through the Vernon County Associate Court: One (1) Count of Trafficking Drugs 2 nd Degree – Class B Felony Hopper is being held in the Vernon County Jail in lieu of a $100,000 cash only bond.
The investigation remains ongoing in a joint effort between Nevada Police, Department of Homeland Security and the United States Postal Service. Citizens are encouraged to contact the police if they have any information that would be helpful to combat crime.
To report criminal activities call 911, contact the Nevada Police Department at (417) 448-5100 or use the Nevada Police Department’s Tip Hotline (417) 667-8477.
Any and all information can be kept confidential if requested.
Approved: Chief Casey Crain 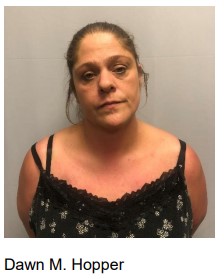