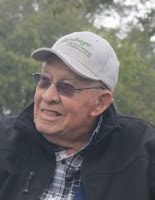 Thomas Edward Masoner, age 88, Fontana, Kansas passed away Tuesday, July 20, 2021. He was born on December 28, 1932 in Louisburg, Kansas the son of Elmer K. and Emma Faye Hoge. He graduated from Louisburg High School. He served his country in the United States Army during the Korean War. Tom was united in marriage to Marilyn Stainbrook on October 16, 1955. He was a farmer in every sense of the word.
He was a member of the American Legion, and past member of the Soil Conservation Board, Water Board, and served as a 4-H Leader. He was preceded in death by his parents, a brother, Ralph Masoner and a sister, Nelle Fay Masoner. Tom is survived by his wife, Marilyn, a son, Norman Masoner(Shelli), two daughters, Ann Christiansen(Greg) and Sharon Trimble(Rick), four grandchildren, Ashley, Megan, Tanner, and Mariah, and five great grandchildren, Dayton, Milli, Wade, Heidi and Harvey.