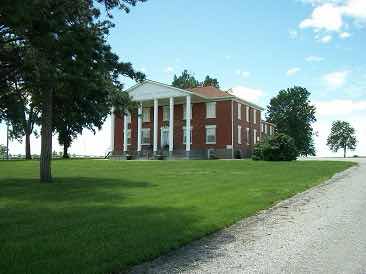 Courtesy of the Bates County Museum

Museum Minute Presents:  This Week in History (According to Herrman’s Archives)

First Days of July in the Year:

1848- The first 4th of July celebration held in Bates Co at Balltown (now part of Vernon Co.).1881 – The City of Butler places four electric lamps around the square.
1880 – George Reif, the Post Master at Rich Hill, moves his Post Office into a tent in new Rich Hill, although there are no buildings or houses there yet.  (It was moved from the ‘Old Rich Hill”, a mile north)
1887 – The Masonic Hall of the Crescent Hill Lodge is nearly complete over H. Moudy’s dry goods store on Adrian’s Main Street.
1879 – The LaCygne Stagecoach, going from Butler to LaCygne, overturns in the rain-swollen Cook Creek, near the Kansas line.  Drivers J. Wayne and I. Evans rescue the two passengers, Tillie & Nettie Pentzer, daughters of a prominentButler furniture & undertaking family.
1866 – O. D. Austin founds the Bates Co Record newspaper.
1904 – Dr. Pyle’s lot, on the northwest corner of the Butler square, has been purchased by the Fraternal Building Association, who intend to construct a 3 story hotel. Business, and lodge meeting place. (The Pennell)
1919 – July 1st, the 18th Amendment to the United States Constitution goes into effect, prohibiting the sale of liquor, in the country.
1884 – Owners/operators of the nine Rich Hill saloons are:  Beatty Bros; Am M. Carpenter; J. Cody; Jno Dickson; D. Metcalf; W. Rolley; Sperry & Parrack; Saunders Bros. & C. Snelling.
1926 – An estimated 5,000 to 8,000 people attend the Charlie Fisk Band concert on the Courthouse lawn, and partake of the ice cream supper sponsored by the Butler Commercial Club and the Bates Co Dairy Association.
1895 – The citizens of Merwin hold a public meeting and pass a resolution to stop the sale of illegal whiskey in the village of Merwin.
1892 – Farmer J. S. Fry, west of Foster, while plowing sod plows up the skeleton of a man, along with an army canteen, a pair of brass spurs, and is thought to be one of General Price’s troops from the War Between the States.
1871 – The boys of the Butler Coronet Bank play at the July 4thPicnic in butler, and then are told there are no funds to pay them.  However, late in the afternoon George Evans, operator of the Great Western Hotel, corrals several people and raises 81 dollars to help them in their expenses on their new band wagon.
1881 – Missouri Governor T. Crittenden gives an oration at the Rich Hill July 4th celebration.
1874 – Over 1600 celebrate at Papinville and over 1000 at Strain’s Grove, on the Miami Creek.
1909 – While the T.  J. Booth family is eating a picnic lunch on the Courthouse lawn, a fireworks stand on the East side of the square catches on fire and an errant sky rocket imbeds itself in the face of 5 year old Herman Booth.  Dr. Christy, who attended him says he’ll be all right.