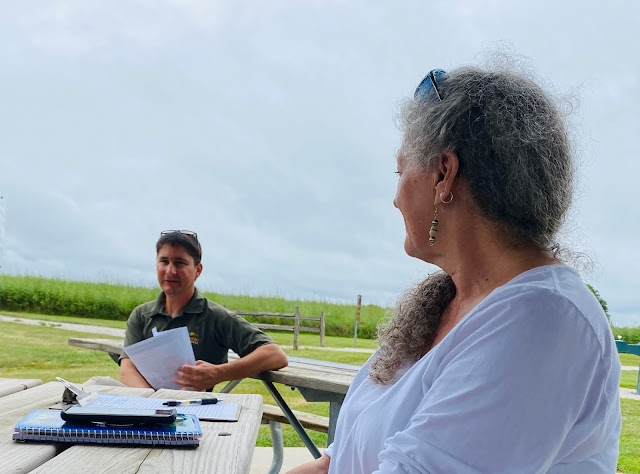 Site administrator Kenny Neal and Bates County Museum curator Peggy Buhr discuss upcoming events at the Battle of Island Mound Historic Site
The Missouri Parks Department held an informational meeting at the Battle of Island Mound site last Saturday and revealed some surprising statistics along with word about upcoming events. Missouri State Parks site administrator for the Island Mound park Kenny Neal advised that attendance at the 40 acre park is way up- and is drawing folks from as far away as Cape Girardeau, St. Louis and beyond. And, as part of an initiative with MoDot, the number may well continue to go up, as in the near future signs will be placed along the interstate pointing to our local park as well.

Neal did point out that upkeep is an ongoing effort that includes replanting trees, mowing and haying/burning off the property on alternating years, and much more. The ultimate goal however, is to return the property to look as it did in 1862 complete with plants and grasses that were prevalent at the time, and that work is expected to be completed over the next few years.

Most importantly, it was announced that there will be a commemoration event on September 18th, 10 am to 4 pm that will include a tent, stage, guest speakers and a full day of family oriented fun with more details coming soon.

For those wishing to learn more, we suggest going to mostateparks.com and searching Battle of Island Mound. In the meantime, the public is invited to the site any time and enjoy walking the ½ mile paved trail while learning the history via kiosks along the way. To visit the site, take 52 west of Butler to K highway south, follow the signs.
Published by Bates County News Wire on August 24, 2021