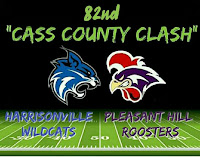 This Friday, September 10th will be the 82nd meeting on the football gridiron between Harrisonville and Pleasant Hill. The Wildcats lead the series 50-25-6.
The football rivalry was described by the Cass County Democrat newspaper in the early days of the 1920's as between, "Ancient Rivals."
The rivalry between the two town's extends back to before the Civil War, and the founding of the county.