A silent procession of over 30 police, fire and other emergency vehicles made their way down Main street Adrian last Saturday evening, en route to the high school sports complex to recognize the tragic events that took place September 11th, 2001 to honor those who died or were tragically injured. While many onlookers joined at the football field, Fire Chief Gary Dizney led the ceremony that opened in his words “We will never forget those who died that day and we will continue to honor those who are serving today”. Dizney stressed that this group encompasses every element of those who serve including firefighters, police, first responders, EMT’s and other medical professionals, who each were honored as they stood and received proper recognition. In recent years, the yearly observation has grown to include recognition of Veterans both past and present, as seen in the photo above, Dizney asked the audience to stand as they remained seated and were recognized with heavy applause.
There was a special element added to the observation this year- “Freedom”, a World Grand Champion in Costume Class horse painted with animal safe colors in a patriotic, American Flag based theme that was added to the ceremony thanks to Bates County Coroner Greg Mullinax. As Mullinax took the podium he noted “I’ve always wanted to do something special for this event, and it seemed quite fitting to add Freedom and owner Jake Benson, who is also a firefighter/EMT.” Freedom and Jake not only joined the silent procession, but made several quiet laps around the football field while ceremonies continued.
Guest speakers included Dr. James Miller, Garden City Fire Chief Mark Lopez and Dave Ullery, who has 60 years in firefighting, lead the ‘Last Alarm’ ringing of the bell and participated in the 3 Rifle Volley. Prayers were led by Adrian Fire Chaplin Jerry Bearce and Pastor Bob Fields of the Adrian Calvary Church. Patriotic music was provided by Faith Hutchens and Susan Davis. 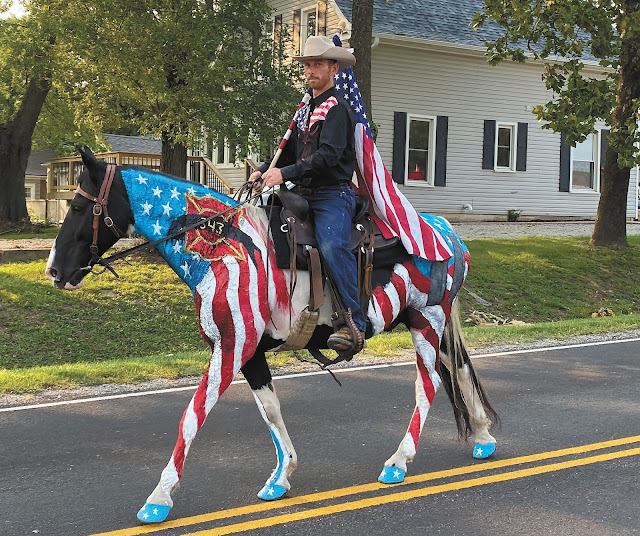