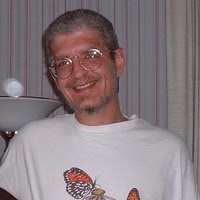 Scot Alan Kelley, 60, of Independence, Missouri, passed away on Wednesday, August 4, 2021 at Northcare Hospice House in North Kansas City, Missouri. A Celebration of Life will be held on September 25, 2021 from 12:00 - 4:00 pm at First Presbyterian Church, Westminster Hall, 417 W Lexington Ave, Independence, MO 64050.
This will be a come and go event, but please plan to stop in to eat cake and ice cream and tell stories about Scot. The family requests that you bring any pictures of Scot with you to be scanned or downloaded and add to the collection of his memories for them to keep. Masks will be required for attendance at services.

Scot was born on August 7, 1960 in Kansas City, Missouri, the son of Arthur Raymond and Patricia Ann (Ballew) Kelley. Scot was a lifelong resident of Independence, Missouri, graduating from Truman High School. For the first 17 years of his life, he lived with his family at Drumm Farm where they worked. The farm taught him many lessons and a variety of skills he would carry throughout his life such as raising livestock and gardening. During his time on the farm, he formed life-long friendships with many of the other boys that lived and worked there with him. Some of whom would come to be considered family to him.

Scot married the love of his life, Susan Brogdon on November 13, 1982, and to this union they had two children: Stephanie and Stephen. He loved dedicating time to his family, and volunteered as a room mother, leading them to change the title to “room parent”. He went on to further his education later in life, receiving a Bachelor’s degree in Business Administration from Park University, graduating with Summa cum laude Honors in 2015. He always wanted to continue learning and wouldn’t settle for less than his best, and always had an eye for details. Those traits would lend well to his career in auditing.

Scot’s true life-long passion was studying and collecting butterflies and moths. He learned from J. Richard Heitzman, a mentor and friend, about collecting, identifying, and pinning insects while in 4-H. He went on to create a museum of Entomology for the butterfly festival at Powell Gardens, where he volunteered much of his time. He also volunteered for Scouts as Scout Master. He followed in his father’s footsteps by earning the honor of Eagle Scout, which he later assisted his son in achieving, and his grandson in working towards the same honor. In addition to volunteering at Powell Gardens and with Scouts, Scot participated in the church and taught many outdoor activities. He was a member of the Idalia Society, the Lepidopterist Society, 4-H Club, the First Presbyterian Church of Independence, Boy Scouts, and Cub Scouts.

There are so many things that he enjoyed doing in his free-time. He was a very approachable person who would often drop whatever he was doing if you asked him for help. Scot was a jack-of-all-trades, but if you asked him for help with something he didn’t know it became a learning experience for the both of you. Scot was also an extremely creative person. He enjoyed working with wood doing everything from burning and carving to making clocks. He also enjoyed working with leather, crocheting, sewing, and taking pictures. He even made a coloring book for Powell Gardens with his family. Working with him on a project was always a unique experience with his creativity and patience, which touched so many people throughout his life and left lasting gifts.

Scot leaves so much knowledge, inspiration, and passion to those who knew him, because you couldn’t help but learn something when you were around him. His legacy will continue every time someone shares what they learned from him with another and for that he will be greatly missed but always remembered.