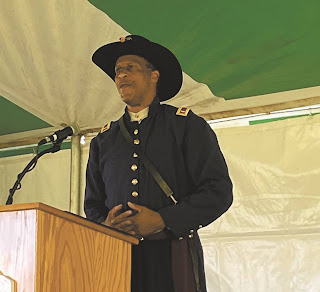 “A real soldier would never let fear overpower” is one sentiment expressed by actor Brother John Anderson in character, as he spoke of the life of  Lt. Patrick Henry Minor and the struggles that ensued while serving in the Union army. Brother John was joined by other actors Kerry Altenbernd who portrayed John Brown; along with a great presentation by the Buffalo Soldiers that highlighted the first such chapter in the country. Bates County Museum Curator Peggy Buhr also shared recollections of Hog Island and stories of Bates County men, along with a short video about Battle of Island Mound that was shown between speakers.
Those who attended were also treated to a taste of life back then, such as outdoor cooking, working with furs and hides, rope making and more. The Missouri Parks Association and the Bates County Museum would like to thank everyone who attended; the next such event will be coming in three years or so. 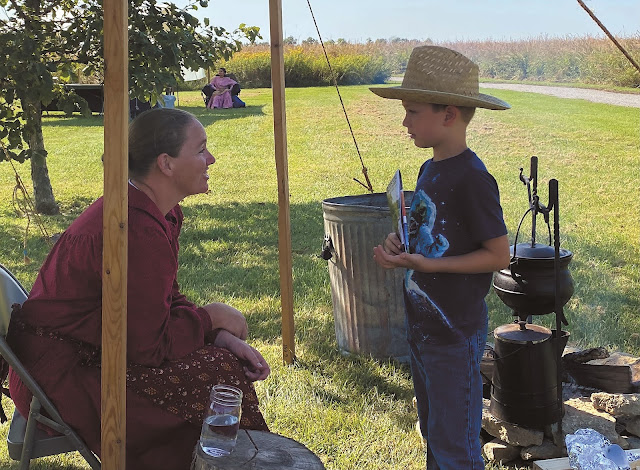 In full costume, Kimberly Pedigo schools a young man on the finer points of cooking outdoors during the Civil War as part of the event held at the Battle of Island Mound site last Saturday. Typical fixins included beans with whatever meat available thrown in, along with a basic biscuit called Hardtack, which is made of flour, water and sometimes salt added. While not especially tasty, the biscuit has a long shelf life and works  well as a basic food. While amused, the young man wasn’t real sure  about making it a regular part of his diet.