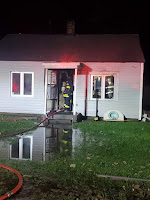 On September 18th around 7:56 p.m. the Nevada Fire Department Responded to reports of smoke coming out of the house located 211 West Park Street.

On arrival to the scene Nevada Fire crews found flames coming from the Northwest corner of the home.

Crews made entry made primary search and initiated fire attack. Once fire was knocked down crews did overhaul to check for extension.