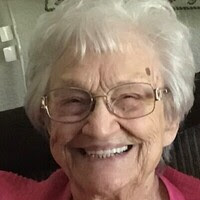 Beatrice J. Turner, age 97, of Clinton, Missouri joined her Lord and Savior on Wednesday, September 15, 2021 at Centerpoint Medical Center in Independence, Missouri. Bea will be interred at Englewood Cemetery in Clinton on Friday, September 17th at 11:00 AM with a graveside service for immediate family.
The family suggest memorial contributions be made to the Truman Lake Cancer Relief Fund and can be left in care of the funeral home. Fond memories and condolences can be left online at www.vansant-millsfuneralhome.com.
Beatrice, better known as Bea, was born in Deepwater, MO on July 6, 1924. She was the daughter of Thomas James Smith and Bessie Mae Liston Smith. Bea attended school in Deepwater, MO and was the ninth child in a family of ten children.

She was married to Gene Cockrell in 1944 and from this union, three children were born: Larry, Sandra, Stephen Cockrell.

She was a deeply committed Christian, and many family members and friends benefited from her daily prayers for them. She also volunteered for several years with a Bluebird group in Clinton.

She later joined the First Assembly of God Church in Clinton, where she was an active member.

She served as treasurer for the Women's Ministry Group for several years and volunteered in Children's Church.