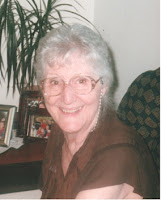 Edith Claire (Harmon) Benson, 94, of Schell City, passed away Wednesday, September 22, 2021 at home. Edith was born on June 23, 1927 in a small cabin on the windswept prairie near Bainville, Montana, the eldest child of William and Gladys Harmon. She grew up on a ranch in the plains of northeast Montana where they raised sheep, cattle, and wheat. Edith was baptized and confirmed in the Lutheran Church. She graduated from Bainville High School in 1945.
Following this she went to Aberdeen, South Dakota, to a nurses training college where she qualified to become a registered nurse. She worked at the hospital in Sidney, Montana for several years until she married Carl Edward Benson on November 24, 1951. She moved to Turlock, California, where Carl and she owned and operated a dairy farm. In 1968, they moved to Colorado to raise sheep. In 1978, they relocated to northern Arkansas. In 1990, they retired to Schell City, Missouri, where Edith remained until her death.

Edith's childhood and youth were spent on her father's extensive ranch on the rolling grassy prairies of eastern Montana. Life was not easy, however, and as the eldest of eleven children, much was demanded of her. Driving a tractor, herding sheep, and laboring in the kitchen to feed the large family and other hired hands was all in day's work. She even piloted a small plane so her father, from the back seat, could shoot coyotes that preyed on their herds of sheep. These youthful experiences on the plains of Montana shaped her deeply, and she never grew weary of sharing her tales about her rugged upbringing on the northern plains.

The family of her birth, the Harmons, were a numerous and boisterous clan known for their strong wills and assertiveness. In this respect, Edith was no slacker. She could argue with the best of the bunch and was loathe to back down from a fight. When not raising her children, two avocations dominated her time. She was an expert genealogist and discovered a prodigious quantity of information regarding her family's history in early America, England, and Germany. Her second passion was nutrition, of which she had an encyclopedic knowledge. But above all, she was an ardent student of Scripture and wore out several leather Bibles from markings and dog-eared pages. Edith's faith in her savior Jesus Christ never wavered. Her place could always be found in her appointed pew at the Church of Israel when the church doors were open.

Funeral services will be held at 2:00 p.m. on Wednesday, September 29, 2021 at the Church of Israel in Schell City, MO. Interment will follow in Green Lawn Cemetery. Friends may call from 1-7:00 p.m. at the Lewis-Hoagland Funeral Home in Schell City on Tuesday with the family receiving friends from 6-7 p.m. at the funeral home.

Memorials are suggested in her memory to the Christian Heritage Academy c/o the funeral home.