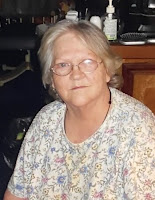 Leota Vondell Burris, age 85, Mound City, Kansas passed away on Thursday, September 9, 2021. She was born in Marceline, Missouri on August 30, 1936 the daughter of Thomas B. and Estel A. Watson Adams. She was united in marriage to Carl Burris. He preceded her in death. Leota was a homemaker and worked in food service for schools and hospitals.
She liked to garden, fish, play bingo and attend the Wall Street Christian Church. She was also preceded in death by five sons, JR, Steven, Joe, Jimmy and Terry, a daughter, Christine, and a sister, Joanne. Leota is survived by a son Allen Burris(Janis), a daughter, Carla Yates, seven grandchildren and numerous great grandchildren.

Funeral service will be 10 am Tuesday, September 14, 2021 at the Schneider Funeral Home and Crematory, Mound City Chapel. A 1 pm graveside will be held at the Mt. Washington Cemetery, Independence, Missouri. Contributions are suggested to St. Jude Children's Hospital. Online condolences can be left at www.schneiderfunerals.com.