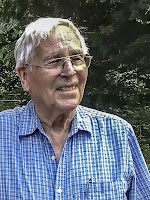 Robert Lee Jefferson, 93, of Foxwood Springs, Raymore, MO, passed away at home September 29, 2021, of natural causes, four years to the day following the death of his wife, Joan. Funeral services will be held 2:00 pm Monday, October 4, 2021 at Mullinax Funeral Home, Drexel Chapel (816-657-4400).
A visitation will be held prior to the service from 1:00 pm to 2:00 pm Monday, also at the chapel. Burial will follow in Freeman Cemetery, Freeman, Missouri. Memorial contributions may be made to Missouri Palliative and Hospice Care. Messages of condolence may be left for the family at www.mullinaxfuneralhome.com.
Bob was born April 20, 1928, at Mankato, Minn., to Anna and Leo Jefferson. He was the only surviving child of two children. He graduated from Rapidan High School in Rapidan, Minn., followed by service in the U.S. Army, from 1950 – 1953, stationed in Alaska and Colorado Springs, where he met his future wife, Joan McGuire of Butler, Mo, and they married on May 10, 1953, at the Virginia United Methodist Church of Bates County, Mo. They moved to Minnesota, where they had two children: Lee Ann and Mark, before moving to Ames, Iowa, and then to Freeman, Mo., in 1978.

Bob worked in the early years in farming, as county assessor and had a career with the Federal Department of Housing and Urban Development as an appraiser. He pursued life-long passions for farming, woodworking, gardening and bird watching, as well as community service in Freeman, Mo., and as treasurer of the rural water district.

The family wishes to extend its heartfelt gratitude for all the friends and family that made Robert Jefferson’s life a joy, and suggest contributions be made to Kansas City Hospice, which team provided the most excellent care and counsel in a most difficult time.