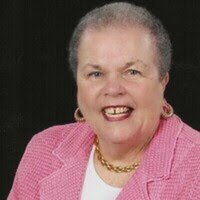 Louise Carleton Winslett Richardson (“Sissy”) died peacefully on September 13, 2021 at the age of 83 at her home in Tuscaloosa, Alabama. Following a private family interment, a service for The Burial of the Dead will take place on September 24, 2021 at 11:00 a.m. at ChristEpiscopal Church with the Reverend Paul Elliott officiating. Masks are required in the church.
Sissy was predeceased by her husband of 58 years, Dr. Luther Washington Richardson, Jr. She is survived by her daughter Louise Talbot Richardson Manzella and her husband Stephen Michael Manzella of York, Pennsylvania; her son Luther Washington Richardson III and his wife Adrienne Taylor Richardson of Tuscaloosa; and her grandchildren Matthew Winslett Manzella, Frances Winslett Richardson, Luther Washington Richardson IV (“Luke”), and Sarah Louise Manzella (“Sadie”). To her grandchildren, she was affectionately known as “Sassy”. She is also survived by her brother The Reverend Hoyt Winslett, Jr. and his wife Emily Cosby Winslett of Tuscaloosa; her sisters-in-law Beth Richardson Howell of Fort Walton Beach, Florida and Nancy Richardson McKinnie and her husband James Merrick McKinnie, Jr. of Burnsville, North Carolina; and several nieces and nephews. The family would like to extend their gratitude to her caregivers DeShonda Davis, Debra Hopson, Lorie Price, and Debra Simmons.

Sissy was born on December 27, 1937 in Tuscaloosa, the daughter of Louise Fargason Winslett and Hoyt Candler “Wu” Winslett. She was brought home to The Highlands neighborhood where she was amongst the first generation of children raised there. With the exception of a few years in the early days of her marriage, Sissy was a lifelong resident of the, neighborhood, and she adored her neighbors and watching the successive generations of children raised there.

In her early years, Sissy attended First Baptist Church of Tuscaloosa, but after an embarrassing spit-ball incident there in ninth grade, she left the church on her own, spent some time at First Presbyterian Church, and landed at Christ Episcopal Church where she remained a devoted member for the rest of her life. The family knows of no further such incidents. Childhood summers were spent at Camp Green Cove in Tuxedo, North Carolina, where Sissy learned to play tennis, at which she excelled. She remained competitive in the sport until the later years of her life. She graduated from Tuscaloosa High School in 1956, attended Sweet Briar College for two years, and returned to Tuscaloosa and The University of Alabama to complete her undergraduate studies. She was a proud member of Kappa Kappa Gamma sorority, but later in life had to graciously overcome her disappointment at having a daughterin- law and granddaughter who are Kappa Deltas. They maintained a jovial, albeit serious,
rivalry to the bitter end.

Following college, she did graduate work at Tulane University in New Orleans, Louisiana, but after marrying Luther, elected to write thank you notes rather than complete her Master’s thesis. Louise was born in New Orleans before the family moved to Winter Park, Florida where Luther served in the Air Force. In 1966, they returned to Tuscaloosa and The Highlands when Luther opened his dermatology practice and their son Luther III was born. Together they created a beautiful and loving home for their children and enjoyed entertaining extended family and friends.

In Tuscaloosa, Sissy was a member of the Junior Welfare Association (later the Junior League), and served as the 1973 Chairman of the J.W.A. Horse Show. She also served on the United Way board of directors, in charge of its professional division. At Christ Episcopal Church, she served as a vestry member and as president of the Episcopal Churchwomen of Christ Episcopal Church. On a diocesan level, she served as president of the Episcopal Church women for two years and as a member of the Diocesan Council. Additionally, she served on the boards of the YMCA, the Salvation Army, RISE, and the Monteagle Sunday School Assembly. She was also a co-chairman of Heritage Week for the Tuscaloosa County Preservation Society and a co-chairman of the Parents Council at The University of the South. She is a member of the National Society of The Colonial Dames of America. Social organizations included the Tuesday Night Supper Club, Revelers, Merry Makers, Pickwick, Arts & Letters, Sewing, LOL Lunch Bunch, and The Carousel Club. As a member of the Mardi Gras Club and Gaieties she served as president. Though Sissy considered herself just “a good ol’ girl”, she was in fact a great lady and will be so greatly missed by her family and friends.

In lieu of flowers, the family suggests donations be made to the Christ Episcopal Church Foundation or the RISE Center at the University of Alabama.