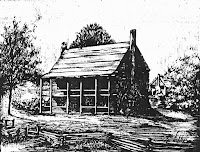 THE CONTINUING STORY OF HARMONY MISSION SCHOOLING
Rev. Dodge ( superintendent of school ) wrote this mission report; “The children are generally proficient in learning to read, in speaking and understanding the English  language. The boys are attending to business abroad morning and evening and the girls are learning to spin. A loom has been erected the past year and one web wove and several others are about ready to go into the loom. We hope soon to be able to manufacture a great share of our clothing.”
A quarterly report was kept on each student. This student, Susan Larivive (Osage) sewed 46 yards of seams, 2 garters and had 18 days in the kitchen.  Sally Dodge (daughter of Rev. Dodge, white child) made 1 chambric hat, 1 cape, altered  1 frock (dress) and 3 days in the kitchen. The boys had rules as follows: Boys called by the teachers are to labor at sunrise and continued for one hour, have recess until 8:00am, then back to labor until school time. At 1:00 pm labor again for one hour.
There was also a Sabbath School held in the evenings with adults also attending. The real problem was one of communication. The missionaries did not speak the Osage language and the interpreters were reluctant to communicate the divine message.
Old Bill Williams was hired by the mission to help the Osage to understand what the missionaries were teaching about the Christian religion. A story about Old Bill Williams will follow in a couple of weeks after the Harmony Stories.
The hope of the missionaries was for the educated and Christianized students to return to their people and lead them to adopt their new ideas and modes of living to bring about a great and lasting change for a better life for the family. But, unfortunately , upon returning to their tribes, the pupils, converts and all, lapsed into their former barbarism, taking with them their former habits and customs.
A majority of the children died soon after reaching their homes. The Indians chose to consider the deaths were the results of attending the school and they became more opposed to education and civilization than ever.
After the removal of the Osage from Missouri the number of Osage pupils in the Harmony School started to decline. Harmony fell within the limits of the state of Missouri. In 1836 the enrollment had dropped to thirty five students, mostly the missionaries’ children were the only students left. With this problem the school will have to be discontinued and the Osage will have to fine a permanent location to live which was in Kansas.
The natives had been moving farther west ever since the Treaty of 1825. It was the turning point of the closing of the mission. The result of this treaty, which the Osage disposed of the remaining land in Missouri, agreed to move into what is now Kansas. Some of the Osage did not move at this time and remained along the Osage and Marais Des Cygnes Rivers.  On May 28,1829 President Jackson proposed the removal of the natives Indians and to all the different tribes their portion to a new territory (Kansas). The government and the natives were satisfied with the proposal. Some of the natives stayed in the area for about another five or six years.
Harmony was a well known locality and white settlers were moving from the eastern states to the west. The population was increasing and the people were wanting to homestead. Some of the mission families moved away and others stayed in the buildings and used the buildings at Harmony. The school was used until March 1836. Some of the pupils had gone back home and moved with their families and others stayed with some of the mission teachers. The teachers that kept the pupils had hopes of protecting the children until they matured.
In 1838 Capt. Wm. Waldo opened a store in the school building and in 1841 Harmony became the county seat of Bates County. It remained the County Seat until it was moved to Papinville. Harmony also had the first Post Office in the county and was named Batesville.
Information for this story was taken from the book : “The First Protestant Missions” by Wm. W. Graves.
Submitted by Phyllis Stewart  (Activity Director)