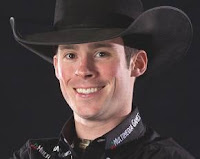 Luke Snyder is a former professional rodeo rider who specializes in bull riding. Originally from Raymore, Snyder is the 2001 PBR Rookie of the Year and the 2001 PBR World Finals Event Champion.
He was inducted in the Missouri Sports Hall of Fame in 2014 and has been in the Guinness Book of World Records twice, once for the most money won in the PBR as a rookie, and once for his incredible streak of 275 consecutive major PBR events.
Check out his amazing stats at https://pbr.com/athletes/riders/profile/1741/LukeSnyder
Source: https://en.wikipedia.org/wiki/Luke_Snyder_(bull_rider)