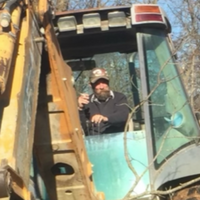 Kenneth Allen Vickers, age 65, passed away on Wednesday, August 25, 2021 at his home in Calhoun, Missouri. Kenneth's wishes were to be cremated. Graveside services will be at 3:00 PM on Saturday, October 16, 2021 at the Calhoun Cemetery in Calhoun, Missouri. Fond memories and condolences can be left online at www.vansant-millsfuneralhome.com.

Kenneth Allen Vickers “Kenny” was born on November 19, 1955. Kenny was the youngest of ten children born to Hubert and Ada Mae {Logan} Vickers of Windsor.

Kenny and Toni {Pinkston} were married on December 27, 1979, at Miami, Oklahoma living in Windsor/Calhoun most of their married life except for a few years when they lived in Gonzalez, Texas for his work.

At around 16 years old Kenny tried his hand at running a backhoe, which he proved very successful at until his retirement. Several years ago, he bought his own backhoe to use at home and help friends, neighbors, and family with their projects. In fact, just a few weeks before his death he helped a neighbor with a project even though he wasn’t feeling well—that is just how Kenny was—always helping others. Many hours were spent in his or Chuck’s shop just visiting or solving world problems with the “guys”, hanging out at Floyd and Debbie’s farm planning what projects were on the agenda for the weekend, or cutting wood for everyone’s stove so they all had their stoves hot and ready for “group meetings”.

Toni and Kenny always had fur babies—whether it be horses, dogs or cats. In fact, Junior, his shop cat is still at work guarding the shop. Kenny buried many animals over the years, the backhoe came in real handy for Toni’s horses and those at the Joy farm.

For many years, Saturday mornings were set aside to make rounds to check on his family and friends—which were a very important part of his life. Kenny loved family get togethers—whether it be 4th of July with his family at Farrington Park or Thanksgiving and Christmas meals with Toni’s family.

Kenny was diagnosed with lung cancer and had just started treatment two weeks before his death (due to complications of the cancer).

He was preceded in death by his parents, brothers Charles, Tommy, Pete and Donald along with sisters Betty Hoover, Mary Kimbrell, and Beverly Stirts. In addition, his mother/father-in-law (Gaynel Mills, Charles Pinkston), two brother in laws (David Pinkston and Jamie Pinkston) along with nieces and nephews.

He is survived by his wife Toni (whom he loved and worried about so much), his daughter Kishia (from his first marriage) and her daughter Harley. Also, his brother Jack Vickers, sister Sandy Scott, sister’s-in-law Debbie Joy (Floyd) and Judy Dodge. Kenny has many nieces and nephews who were near and dear to his heart, along with all the friends he met along the way.

“There and back again”