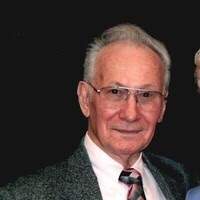 Robert Wayne Williams, age 97, of Clinton, Missouri passed away on Thursday, October 7, 2021 at Jefferson Gardens Senior Living Center in Clinton, Missouri. Funeral service will be held at 2:00 PM on Tuesday, October 12, 2021 at the Vansant-Mills Chapel, Clinton with a visitation one hour prior to the service.
Burial will follow in Englewood Cemetery, Clinton. Memorial contributions can be made to Allen Street Baptist Church of Clinton and can be left in care of the funeral home. Fond memories and condolences can be left online at www.vansant-millsfuneralhome.com.

Wayne and Ginny bought Mary Ann’s Flowers on April 1, 1964 from John and Mary Ann Rodman. They later owned Clinton Flower Shop and Cass County Floral before opening Area Floral which they operated from 1993 to 1999. Wayne worked as a greeter at Walmart after retirement.

Wayne loved to travel. He was a member of the Clinton Country Club and a Clinton Chamber of Commerce member. And was a faithful member of Allen Street Baptist Church of Clinton.

He is preceded in death by his loving wife Virginia in 2012, his parents and one brother Doyle Williams in 2013.

Wayne is survived by his brother Don Williams of Johnstown, Missouri and one sister Carolyn Shaffer of Pasadena, Texas and many Nieces and Nephews and family members.