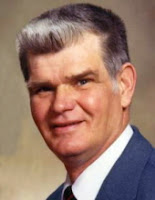 Wayne Jackson Houston, age 93, resident of Richards, MO, died Tuesday, October 5, 2021, at Medicalodge of Fort Scott, KS. He was born on September 7, 1928, in Bagnall Dam, MO, the son of Andrew Jackson and Ida Mae Houston.
He graduated from Richards, MO high school. He served in the U. S. Army. Wayne worked his entire life on the farm. He loved his tractors. In fact, he was still operating tractors up until a year ago.
Wayne worked for several years in groundskeeping for Fort Scott Community College until retirement. He married Lois Darlene Cooper on July 20, 1981, in Fort Scott. She preceded him in death on May 20, 2017. He enjoyed fishing and hunting through the years. He was a member of the Unity Lodge #495 Richards, MO, and the Community of Christ Church in Fort Scott.