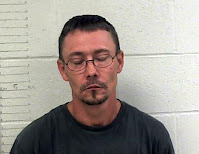 The Missouri State Highway Patrol’s Division of Drug and Crime Control announces the arrest of Chad D. Roberts, 36, of Sedalia, Missouri, on Wednesday, November 3, 2021, for promoting and possession of child pornography.
The arrest was the result of an investigation conducted by members of the Division of Drug and Crime Control’s Digital Forensics Investigative Unit and the Missouri Digital Forensic Center.
On Wednesday, November 3, 2021, investigators executed a search warrant at Roberts’ residence on Chestnut Street, Sedalia, Missouri. As a result of the search, investigators seized child pornography and computer equipment. Roberts was arrested and transported to the Pettis County Jail.

On Thursday, November 4, 2021, the Pettis County Prosecuting Attorney’s Office formally charged Roberts with one count of promoting child pornography and three counts of possession of child pornography.
The investigation by the Division of Drug and Crime Control is ongoing. Roberts remains in custody at the Pettis County Jail, with a bond of $150,000. The Patrol was assisted by the Sedalia Police Department.

The above charges are mere accusations and are not evidence of guilt. Evidence in support of these charges must be presented before a court of competent jurisdiction whose duty is to determine guilt or innocence.