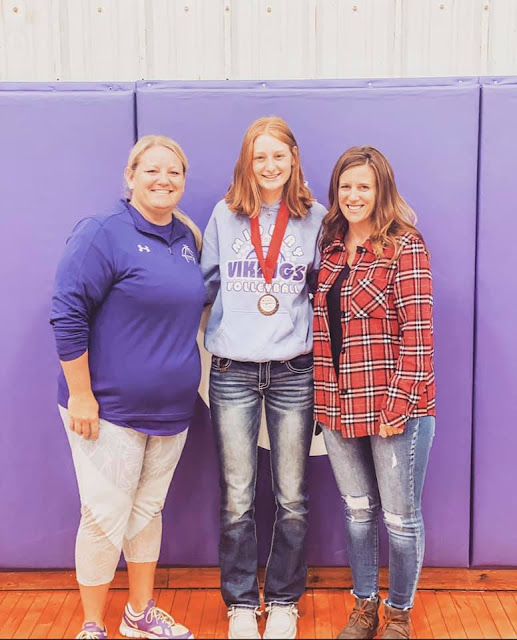 We are so excited we were able to travel to Midway today and award this week’s State Farm student athlete of the week Senior, Baylee Russ. Baylee is a Middle Hitter for Midway volleyball and was nominated by her Coach CJ Chamberlin. Coach Chamberlin stated “Baylee helped lead our team to a district championship, sectional win, and an appearance in quarterfinals.
She is a leader for our team in so many ways and a great role model for students and athletes in our school. Baylee was named MaxPreps/AVCA volleyball player of the week the last week in October for the state of Missouri! During that week Baylee had 77 kills, 92 digs, 4 aces and 4 total blocks.”

When we asked Baylee what is something she has learned from playing sports that she can apply later in life she stated “I have learned to constantly work hard and always be preparing for what is next. And that working as a team is better than trying to do it alone.” When we asked her what it takes to be a successful athlete she stated “you have to have a mindset of a champion. You have to give everything you have 100%of the time and work together with your team. There is no “I” in team.”
We also asked her what it takes to be a leader and she stated “this is a responsibility I take very seriously. You have to be energetic and focus on doing your job all the time whether that’s on the court or in the classroom. You have to lead by example.” Baylee hopes to continue playing volleyball in college and she plans on majoring in elementary education. It was such a pleasure meeting Baylee and we wish her the best of luck in the future!
Pictured left to right:  Head Volleyball Coach CJ Chamberlin; Baylee Russ, daughter of Rob & Stefani Russ; Kellie Davidson State Farm Agent