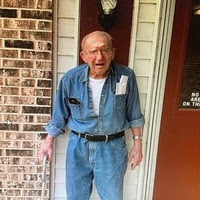 Harry M. Holcomb, age 88, of Clinton, Missouri passed away on Saturday, December 25, at Westwood Living Center in Clinton, Missouri.
Funeral services will be held at 11:00 AM on Thursday, December 30, 2021 at Vansant-Mills Chapel. Visitation will be from 10:00-11:00 AM prior to the service. Burial will follow in Englewood Cemetery in Clinton, Missouri.
The family suggests memorial contributions be made to the Clinton VFW or the Veterans Home in Warrensburg, Missouri and can be left in care of the funeral home.

Harry was born on August 4, 1933 in Batavia, Iowa to Clarence George Holcomb and Edith Gertrude Thomas Holcomb. He graduated High School from Oskaloosa, Iowa in 1951. He served in the United States Army from 1953 to 1955. He was united in marriage to Mary Lou Gregory on June 26, 1955, making their home in Agency, Iowa.

They moved to Clinton, Missouri, in 1964 and Clinton became their family home. Harry worked in the farming industry for most of his life. Early on he worked at Linstrom Hatchery, later known as the Clinton Hatchery. His career included employment an over-the-road truck driver, Stewart-Nattingers, the Clinton Fire Department as a fire truck driver, farming with Carl Barnhart, heavy equipment operator and his last full-time employment was with Cook Tractor and Auction.

Services have been entrusted to Vansant-Mills Funeral Home in Clinton, Missouri.