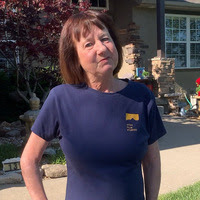 Shirley Frances Hunter, age 65, passed away peacefully at the family home, after a short illness, on Wednesday, December 29, 2021 at her home in Clinton, Missouri with her loved ones by her side. Funeral service will be held at 1:00 PM on Monday, January 3, 2022 at Vansant-Mills Chapel in Clinton.
Visitation will be from 12:00 - 1:00 PM prior to the service. The family request that masks be worn for the visitation and service. Burial will follow in Englewood Cemetery, Clinton. The family suggests memorial contributions be made to GVMH Hospice or St. Jude's and can be left in care of the funeral home.

Shirley was born the thirteenth of fifteen children to Johnie & Velma Snowden on September 28, 1956 in Stayton, Oregon. Shirley grew up with her mother, father, 9 brothers and 5 sisters, in various parts of the United States and graduated from Blue Eye High School in 1975.

After graduation, Shirley ventured out for various jobs in Branson and then Wyoming. Wyoming didn’t turn out to be her cup of tea, so when her sister Linda offered her a job at the Clinton Country Club, Shirley jumped at the chance. It was there that she met the love of her life, Rodney Hunter, where he also worked as a greenskeeper on the golf course. Shirley and Rodney were married at Trinity Lutheran Church in Clinton on November 24, 1979. Shirley and Rodney settled in Clinton and in 1982, their daughter, Tara, was born. Tara was the center of Shirley’s life, and she was incredibly proud of her when she graduated from the University of Colorado with a degree in film production.

Shirley had a servant’s heart and was always willing to lend a hand wherever needed. She was a hard worker her entire life and found great satisfaction in a job well done. She loved to tell a good joke, play a round of golf with her friends, watch the Kansas City Royals and Chiefs, grow flowers in the summer and spend time with family and friends. Shirley always looked forward to her annual 4th of July party— complete with a fireworks display that had no rival.

Shirley will be remembered for her love of family and fun.

She is preceded in death by her mother Velma Snowden; her father Johnie Snowden; brothers Allen, Kenny, Virgil, Ferris, and Lonnie Snowden.