From the desk of Benton County Sheriff Eric Knox

I want to start this out with a shout out to the Pettis County Sheriff’s Office, Deputy Moore and his partner K-9 Cav! We appreciate your willingness to help us bring justice to our community when it comes to fleeing felons.
On January 14, 2022, the Mid Missouri Drug Task Force and the Benton County Sheriff’s Office, served a narcotics search warrant at 24721 Hi Lonesome Road, a rural Cole Camp residence. This warrant was a culmination of weeks of excellent investigation and perseverance from our drug task force.
Four suspects were arrested upon entry to the residence. Kimberly A. Dickinson, 33, of the residence and Bobby D. Johnson, 42, of Sedalia were both charged with possessing approximately 73 grams of suspected methamphetamine, drug trafficking in the 2nd degree and tampering with physical evidence. Both suspects are on probation for previous drug offenses, bonds for both were set at $10,000 cash/surety.
James R. Schull Jr., 36, of Marshall and Betty A. Hern, 30, of Malta Bend were charged with possessing approximately 103 grams of suspected methamphetamine. Schull was also on probation for previous drug charges and a charge for a felon possessing a firearm. In addition, Schull had a warrant for unlawful use of a weapon from Pettis County with a bond of $8,000. Both were charged with trafficking in the 2nd degree with a $20,000 cash/surety bond. Deputies discovered there was a fifth suspect that fled upon the arrival of law enforcement.
Randall A. Wilson, 32, of Marshall fled on foot. Pettis County Deputy Moore and his K-9 partner responded to the scene on Hi Lonesome and immediately picked up the scent of Wilson. K-9 Cav led law enforcement to discarded clothing and a measurable amount of suspected methamphetamine. Wilson was later recovered three miles away and taken into custody without incident. Wilson was transported to the Benton County Jail where additional narcotics were discovered, secreted on his person, inside the facility.
Wilson was also on probation for previous drug offenses and charged with multiple offenses relating to his involvement as well as possessing approximately 10 grams of suspected methamphetamine. Wilson was given a bond of $10,000 cash/surety.
On Monday, January 24th Deputy Moore and his partner were once again instrumental in the apprehension of Lawrence A. Cole, 44, of Warsaw. While patrolling in the area of Brushy Chapel and AC Highway, Benton County Deputies encountered a stolen pickup truck which fled when a traffic stop was initiated. Cole led deputies on a chase all over central Benton County, ending on McDaniel Road after a successful deployment of spike strips on BB highway. Cole fled on foot after abandoning his stolen vehicle. Deputy Moore and K-9 Cav once again deployed and tracked Cole into a heavily wooded area where he was discovered over 30 feet up in a tree.
Cole was taken into custody without further incident. Cole, a persistent offender had multiple arrest warrants from Benton County and was also charged with the stolen vehicle, drug charges and fleeing from law enforcement. Cole is being held in the Benton County Jail on no bond warrants. 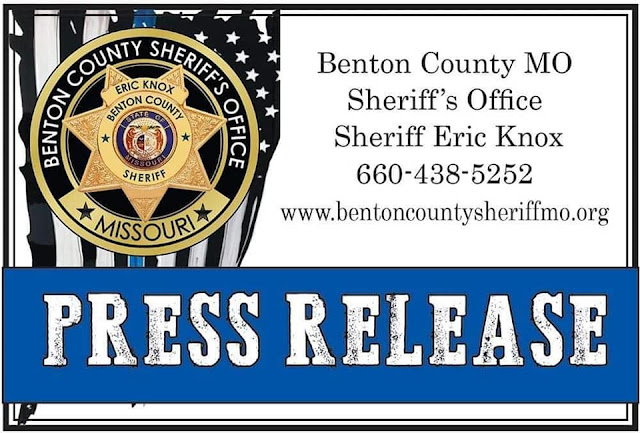