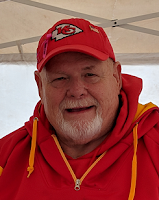 Richard Hart Carpenter, (known by many as Coach or Carp) of Nevada, MO passed away in Bentonville, Arkansas on December 29, 2021 after complications due to previous surgeries.
Richard was born on February 4, 1949 to Harold L. Carpenter and Marjorie Hart Carpenter. Richard was named after his late grandfathers, Richard B. Carpenter and Ben H. Hart.

He is also survived by Raymond Crawford, many dear cousins, previous wives, Karen Anderson and Mary Johnson. He is also survived by many dear friends and his Kansas City Chief’s Tailgate Family. While visiting with Brent Mendenhall he said the first Kansas City Chief’s game he and Carp attended together was in the 1960’s when the game was still held in the small Municipal Stadium and the last they attended together was December 12, 2021 at Arrowhead Stadium. Richard had been a season ticket holder for many years and many friends Rusty Reed, Mel Gulliford, Sandy Norcross, Brent Mendenhall just to name a few, were always willing to drive him since he was unable to drive due to losing partial eyesight several years ago.

He was preceded in death by his parents, daughter Angie Perry, many cousins and special friends, Doug Cambell, Regar Todd, and Coach John McNeley as well as Kelly Branham who all shared their love of Nevada sports, Missouri Tigers and last but not least Kansas City Chiefs.

Richard attended all 12 years plus kindergarten in the Nevada R-5 School District. He attended PSU 2 plus years and later received his Bachelors’ Degree from Missouri Southern State University. Many of you know him through his various work. He worked at the Nevada Hab Center, History Teacher and Coach, El Dorado Springs, MO (coaching was his FAVORITE of any positions he held). After teaching he decided to start his own home construction business which he continued until his health did not allow. After retirement he started writing his weekly column for the Nevada Daily Mail and I know many of you have enjoyed reading them over years and he received many compliments, which he greatly appreciated. Richard was a very gifted man with a great memory for anything historical. He was also President of the Men’s Senior Golf League at the Nevada City Golf Course. He actually played with the Senior group on Tuesday, December 14th, before he entered the hospital the next morning.

No services are planned at this time.