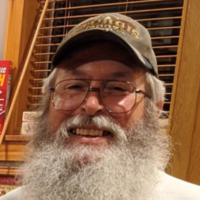 Ronnie Wayne Riecke was born and raised in Clinton, Missouri to Ronald and Betty Joyce (Klein) Riecke on June 9, 1953. Ronnie was a member of the Clinton United Methodist Church and graduated from Clinton High School in 1971. Ronnie married Judy Winn on July 14, 1996 and lived in the house that he and his dad built together in 1974. He worked for B&H Freightline as a truck driver for 42 years. He made many friends along the way and later retired in 2016.

One of Ronnie and Judy’s greatest passions was traveling on their Harley. They rode together over 200,000 miles all over the country, especially the mountains. They belonged to the H.O.G. (Harley Owners Group) Chapter in Sedalia, Yeager’s Cycle. During those years they rode and worked many fundraisers for numerous charities.

He was such a dedicated, loving family man. He loved going to all the grandkids activities. He loved them all so much. He called them his “GRANDS” and “GREATS”. He bragged with such pride about his children and their accomplishments.

He loved camping with the family and always asked for biscuits and gravy and “what’s cooking on the smoker”? He had such a giving heart. He would always bring silly gifts to all the GRANDS and GREATS, and little gifts and sweet cards to Judy and Memom. Their home was never lacking love and laughter. He will be so so missed.

Ronnie is preceded in death by his parents, Ronald and Betty Joyce (Klein) Riecke.