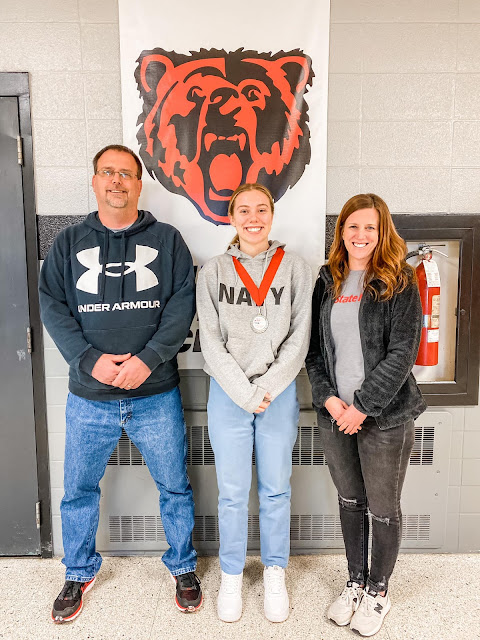 We are so happy to announce this week’s State Farm student athlete of the week Blaire Miller. Blaire is a senior and plays shooting guard for the Butler Lady Bears. She was nominated by her coach Brad Diehl. Coach Diehl stated “Blaire is averaging 14 points, 7.4 rebounds, 3.6 steals and one block a game.
She is a leader for our team on and off the court and one of the best players in the area.” We asked Blaire what she feels it takes to become an elite athlete. She stated “it takes full commitment throughout the entire season, but more importantly it is the work you put in during the off season every day. Every athlete works hard during the season, but it’s those who put in the work all year long who really excel.” We asked Blaire something she has learned from playing sports that she can apply later in life.
She stated “I’ve learned you have to work for want you want in life, you have to be willing to put in the work. Also, I’ve learned the importance of working together as a team. It takes teamwork to accomplish goals and win. You can’t do it alone.” When asked what she thinks it takes to be a good leader she stated “holding yourself just as accountable as you do everyone else. You have to earn respect and you can’t be a hypocrite.
You have to know people will make mistakes and take those opportunities to get better and learn.” Blaire is undecided on where she will attend college after graduation. She plans to attend a four year college and major in business/law. With hopes of pursuing a dream of hers and continuing on to law school. She hasn’t decided if she will be done playing sports or continue to play in college. It was such a pleasure talking to Blaire. We wish her and the lady Bears the best of luck as they take on Archie Saturday at 2:30 for 3rd place in the Archie Tournament.
Pictured left to right: Head Coach Brad Diehl, Blaire Miller, daughter of Dave & Susie Miller, Kellie Davidson State Farm Agent
Published by Bates County News Wire on January 28, 2022