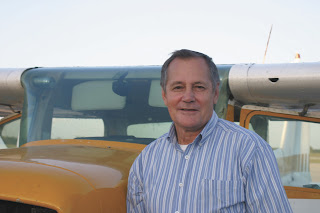 Cold, cold, cold…for much of the past week, that was the operative word around the Butler airport. Airplanes do perform well in the dense air, but ya gotta get ‘em started first. It was good weather, between the snow threats, as long as your engine heater works.

Seen around the traffic pattern was a Piper Arrow, a Piper Archer, a Cessna 182RG and a bunch of LifeFlight Eagle med-evac helicopter pass-throughs. A chap in 1950 Ryan Navion stopped for fuel Thursday, working his way along from Denver to Norfork, VA as the big winter storm was about to hit out east. He opted to leave the plane in the Kansas City area and come back to get it later. Out of our local hangars, Kainen Nance flew over to Paola for barbeque in a Cessna 150, Jeremie and Jim Platt flew the Grumman Tiger, and several training flights took advantage of clear skies.

A total of four Fliars met for breakfast at Miami County airport on Saturday morning, despite the chill and a 40-knot west wind that impeded progress on the way over. We were able to knock about 15 knots off the headwind by dropping down to 1000 feet above the ground. It’s always nice to have the wind at your back coming home.

Thursday morning’s weather didn’t meet the forecast; we expected clear skies, and that’s what Harrisonville and Nevada was reporting on their automated reports, but there was a strip of low clouds across Bates county with 1500-foot ceilings and tops at 3000 feet AGL. Like I always say, “the weather is what it is, not what it’s supposed to be.”

One of our former local pilots has moved to a Texas airport with two intersecting runways, one a paved strip only 25 feet wide and another that’s all grass, 100 feet in width. The choice of which to use is a tough one. If the wind favors the pavement, it’s the obvious choice, but because it’s narrow, it must be avoided in favor of the turf when there’s a crosswind. Don’t know what he’ll do when the grass strip is soft from rain. I told him to be ready to land somewhere else with more spacious accommodations.

In left-over business from last week, we were seeking a definition of “P-51 time” added to your logbook totals. No, it doesn’t mean you’ve flown a Mustang fighter plane. Back in the day, Parker Pen Company made a Parker 51 fountain pen, so any doubtful flying time claimed would be termed “P-51 time.” An old FAA inspector once held up my ballpoint and said “this can write anything in a logbook.” Okay, tell us what the “truck-a-plane” was at Bede Aircraft’s factory in the 1970s. Send your answers to kochhaus1@gmail.com