Arrest made in vehicular homicide in Henry County 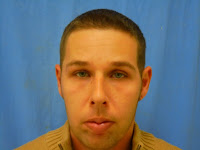 Tuesday, March 15th, 2022:
An arrest warrant has been issued for Shane Ray Chesher, age 36, of Windsor, Missouri, for the Class A Felony of First Degree Murder, in connection with an incident that occurred on East Jefferson Street, Windsor, Missouri, on Friday, March 4th, 2022.
A criminal complaint was filed with the Henry County Associate Circuit Court today by the Henry County Prosecuting Attorney’s Office, regarding Chesher’s alleged involvement of being the driver of a vehicle that struck and severely injured Gail Kirn, then fled the scene.
Gail Kirn was transported to a Kansas City area trauma center by air ambulance to treat life threatening injuries that he sustained as a result of the incident.
During the morning hours of Tuesday, March 15th, 2022, Kirn succumbed to his injuries and passed away. Later the same afternoon, Chesher was located and taken into custody in Kansas, prior to the arrest warrant being issued.
He is currently in custody on a “no bond” warrant and will face being extradited back to Missouri in the near future.
Published by Bates County News Wire on March 15, 2022