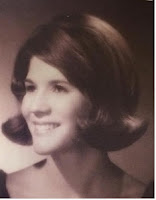 She graduated from Nevada High School in 1965 and attended the University of Missouri, Columbia graduating with a B.A. in Vocal Performance. She subsequently attended Western Michigan University in Kalamazoo where she received her M.A. in Vocal Performance, and also received her Master’s degree in Psychology from Pittsburg State University in 1987. Mary Jo was a tremendously gifted musician and a consummate performer. A spinto soprano with a warm, dramatic timbre to her voice, she was also a multi-instrumentalist who played the bassoon and piano.
While at MU, Mary Jo was a flautist in Marching Mizzou. It was during summer band camp where she met her ex-husband David Litten (they unknowingly lived next door to each other in Nevada the summer after their senior year of High School).
Mary Jo performed in various operatic productions during her college years and later taught music and voice at both Southwest Baptist University and Cottey College. As the director of the Chancel Choir at the United Methodist Church, she planned and arranged music for services and frequently performed as a soloist, especially during holiday services. Mary Jo instilled a deep love of the Arts in her children with whom she performed in various productions at the local Community Center for the Performing Arts.

A life-long student with a passion for learning, Mary Jo continued her education at Pittsburg State University and Kansas State University in the mid-80’s through mid-90’s, earning her Ph.D. in Social Psychology from the latter in 1996. After receiving her Ph.D., Mary Jo returned to Pittsburg State University where she was a valuable tenured professor in the department of Psychology and Counseling. During her time at PSU, Mary Jo was an outstanding instructor who cared deeply for her students. She was passionate about teaching scientific writing and research methods to her students as she clearly understood the importance of the role that science plays in understanding human behavior. An incredibly caring and compassionate person, Mary Jo also championed progressive causes and ideals.
She donated her time and money to the advancement of women and minorities and helped her parents establish a sustaining scholarship at Pittsburg State University for students pursuing degrees in Psychology and Counseling. Mary Jo retired from PSU in 2010 and her presence has been deeply missed.

Most importantly, Mary Jo was an amazing and loving mother, sister, daughter, aunt, and wife. She demonstrated a deep and abiding love for her family which formed the basis of her care and compassion for her fellow man. Mary Jo imparted in her children the same values, fairness, compassion, and equality that she championed throughout her life.

The family would like to extend a heartfelt thank you to all the staff at Barone Alzheimer’s Care Center, especially those who helped Mary Jo transition in her final hours of life. The dedication and level of care she received during her time at Barone’s was truly awe-inspiring and unprecedented in our collective experience.

A Celebration of Mary Jo’s Life will be held Saturday, May 7, 2022, at Ferry Funeral Home at 10:00 a.m. with burial at El Dorado Springs Cemetery immediately following.

The family will host visitors at the home of David Litten and Betsy McReynolds at 1:00 p.m.

Sarah and John would like to extend their deepest, heartfelt thanks and appreciation to David and Betsy for helping Mother many times over the years when we could not be present. The love and grace they displayed for our mother can only be repaid by paying it forward. We love and are thankful for you both.

In lieu of flowers, the family requests donations be made in Mary Jo’s name to the Cure Alzheimer’s Fund (www.curealz.org), the Neighbor’s Center of Nevada, Mo., (417-667-3990), or the Robert G. and I. Louise Lasley Family Memorial Scholarship at Pittsburg State University -Scholarship #1130604 (620-231-7000) ask for the Foundation Department).