The Clinton School District has named Tom Collison the next head golf coach at Clinton High School. Mr. Collison is currently a JROTC instructor at CHS, a role he has served in for 8 years.

Athletics has always been an important part of First Sergeant Collison’s life. During high school, he was a three-sport athlete in football, basketball and track. He has coached football, basketball and baseball at the youth-level, and is currently the coach for the CHS archery team, a program that has seen tremendous growth and improvement in the past six years.

First Sergeant Collison is a 23-year veteran of the United States Army and holds an education degree from Allied American University. He has been married to his high school sweetheart, Jeanne, for 33 years, and they have four grown children, Zach, Logan, Deven and Sophia.

Collison is looking forward to making an impact in the lives of student-athletes, “When it comes to coaching, the most exciting part for me is being able to make an impact on a young person’s life. Some of the most influential people in my life were my high school coaches. I am very passionate about golf and practically live at the golf course when not at work. I want students to be passionate about something, it doesn’t have to be golf, but it has to start somewhere.”

Alex Johnson, Activities Director, says, “I have said it before and I will say it again, there is a certain buzz in the air right now around Clinton Cardinal Athletics and Activities. I believe that this buzz is a massive shift in culture and First Sergeant Collison is another piece of the puzzle that fits perfectly in changing the narrative of how Cardinal Activities are viewed from the outside looking in.
I am beyond excited to get to work with First Sergeant Collison and I know that he will go ALLIN for our Cardinal student athletes, as he has already proven capable of in his current roles in the district. Welcome, Coach!”
#CardinalPride 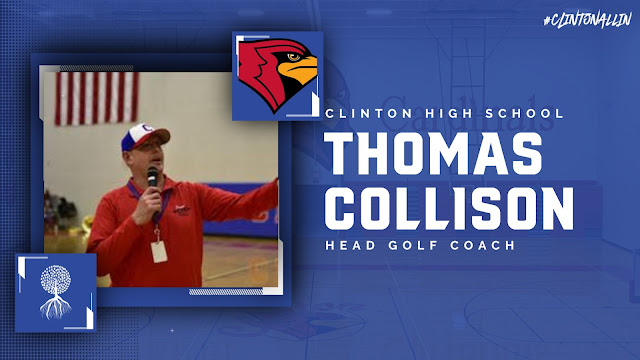