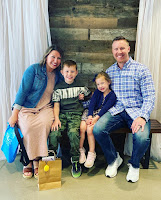 During last night’s Harrisonville School Board meeting, the Board of Education approved Brandon Hord as the new band director for Harrisonville High School and assistant director at Harrisonville Middle School.

He spent the last five years as Director of Instrumental Music at Rockhurst High School. Prior to that, he was the director of bands at Raytown South High School and Hickman Mills School District. He has a total of ten years experience as a band director.  He is also a Cass County high school alum as he graduated from Ray-Pec High School.

Hord is a member of the Missouri Bandmasters Association, the National Association of Music Educators, and Phi Mu Alpha Sinfonia (a music fraternity). He also earned his Eagle Scout during high school.

Hord is married to his wife, Tyler, and they have two children, Henry and Claire.