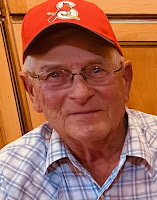 Alan is preceded in death by his father Stephen Eck, sister-in-law Shelley Eck, and nephews Jason Eck and Brett Bowman.

Alan Eck and Renee’ Pennock were united in marriage on November 25, 1978 in Sharon, KS. Alan began his career as a welder for Schmidt’s Welding in Sharon, KS where he and Renee’ began their family. In 1983, they then packed up their family and moved to El Dorado Springs, MO where he continued to weld before starting his 30 year career with 3M.
When Alan wasn’t sleeping to prepare for his next midnight shift, he could be found working in his shop on different projects, building things for his children, or simply hiding from the chaos. Alan and Renee’ spent most of their time chasing their children to their many school activities or sporting events. They didn’t pause for long before they were doing the same for the next generation as the grandkids started adding up.

Alan grew up in a large loving and hardworking family. Growing up if he wasn’t working on the farm he was playing whatever sport he could find, with softball being his favorite. Alan shared with his children that he was once crowned “King of the Court” for his high school basketball team.
He passed his love and athletic talents onto his children and spent endless hours watching and cheering them on. While Alan’s first love was always his family, he also enjoyed a good joke, a card game, a Werther’s Original that he lovingly shared with the grandkids while also giving them a hard time. If he wasn’t giving his grandkids a hard time, he was taking a trip to the gas station to buy a winning scratchers ticket.

While Alan will be missed dearly by his family and friends, he is now in his heavenly home, where he learned at a very early age was the ultimate gift at the end of a full life.