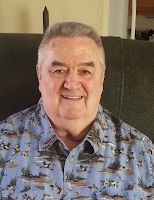 Dan graduated from Birch Tree High School in 1963 and entered the United States Army. He served his term as a Nike Hercules Missile Specialist.

After the military his jobs included a policeman, a cabinet factory manager, and a forklift driver at French’s, now known as Ricket Benckiser, where he retired in 2005. He then moved to Thayer, Mo until his last eight months at Cedarhurst Community Living in West Plains, MO.

Dan had a magnetic personality and could make the shyest of people smile. He never knew a stranger and made a friend wherever he went. His funny quick wit kept everyone laughing. As his niece, Anna, said, “Uncle Buck was not the life of the party, Uncle Buck was the party!” Along with his funny side, Dan was kind, generous, faithful, loving, loyal to the end, and we can’t leave out, “stubborn.” His dedication to family and friends was undeniable.

Those gone before Dan are his parents, his son, Daniel Christopher Harper, his brother, Billy Bruce Harper, and brother-in-law Donald Wayne Estes.

Remaining are his siblings, Bob and Avalyn Harper, Rosemary Estes, and Marcia and Mike Piper. His children, Brian and Katrina Addison, Rodney and Leigh Addison, Lisa and Matt Pickering, and Scott and Jennifer Jones, along with grandchildren, great-grandchildren, nieces, nephews and many, many friends.

In lieu of flowers the family suggests contributions be made to the St Jude’s Children’s Hospital in care of the Sheldon-Goodrich Funeral Home.

Interment
Dan will be laid to rest next to his youngest son, Daniel, at Greenlawn North in Springfield, Missouri