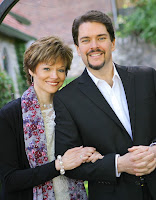 Gospel music recording artists Phil &Pam Morgan will be appearing at Ohio Christian Church, 7 miles west of Lowry City on A Hwy., on July 30. The concert will begin at 7:00 p.m. and is part of their national "AMEN" Ministry Tour.
The multimedia presentation combines close family harmony with accomplished instrumentals for a fun, motivational experience. The couple's message is summed up in their signature song, “Take a Stand”- a triumphant theme considering Pam was once told she would never stand on her own, much less walk again.

The husband and wife team from Kansas City, MO, began singing together full-time in 1996, but their ministry came to an abrupt halt Sunday afternoon, June 4th, 2000, when the couple's van crashed into a bridge. Pam was thrown onto the roadside, suffering numerous injuries including a broken neck that left her completely paralyzed from the chest down. Top surgeons said she would never feel or move most of her body again.
The couple immediately began a prayer chain from their PhilandPamMorgan.com website that soon circled the globe. Much to the doctor's amazement, feeling and movement began to gradually return to Pam's lifeless limbs. In one year she progressed from being wheelchair bound to walking unassisted.
The specialists still have no explanation for Pam’s miraculous recovery, but the Morgan's attribute her healing to the power of God. Exactly one year after the accident, Phil and Pam walked into a Nashville studio to record Living Proof. Phil, an award-winning songwriter, composed all the songs on that CD as well as many recordings that followed.

Pastor Mark Young has hosted several of the Morgan's concerts. "Phil has an amazing gift of writing their personal journey of faith into music that relates to everyone," he said. "His lyrics speak truth and offer hope in a way that is truly impressive."

"When tragedy struck our family, God was the only One who got us through," Pam said. "My prayer is that through our story and music, others will be motivated to walk with God everyday, no matter what life brings."

The Morgan's inspiring message has been featured on Oprah, Montel, Discovery Health Channel and The 700 Club. The full 15-month account has been published in her book, I Stand, by Jubalee Press, and is currently in its fourth printing.
Their music is heard on Christian radio across the United States, Australia and Europe, and their live appearances entertain and encourage audiences nationwide with an an unforgettable blend of music, humor and heart-to-heart honesty.

This is a concert for the whole family! Enjoy the music and stay for refreshments following. For more information about the concert, contact Alan Black, Pastor of Ohio Christian Church, at 660-200-5971.
Published by Bates County News Wire on July 11, 2022