The Museum Minute: Police Chief in the hot seat 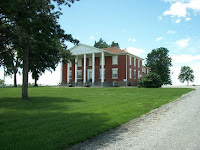 1879 The residence of Mr & Mrs William E. Walton is nearly finished and is truly the finest in Butler.

1893 The Butler city council passes an ordinance prohibiting the playing of a ball game, tennis, or croquet match on any Butler street or alley.

1957 Harley Penney, of Amoret, is sentenced to life in prison for the March 14 murder of his estranged wife Violet.

1967 A delegation from the Butler Chamber of Commerce, headed by President J.C. Wiseman, Dale Crockett & Chuck Thomure meet with the director of the Miss Missouri Pageant in Springfield, to discuss several violations of the rules. No satisfaction is given.

1989 The Butler police chief is in the hot seat, literally, when he was driving a city patrol car that catches fire and is destroyed.

2000 Larry & Marie Gilkey celebrate the 3rd anniversary of the opening of their Rich Hill’s Uptown Cafe.

2000 Len Bartz, Butler photographer, is honored in Las Vegas at the annual Convention of the Professional Photographers of America. He received the association’s highest award, Master of Photography.