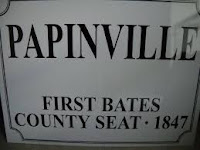 Papinville has had many spellings such as: Papinsville, Pappinville and now the correct way Papinville. Early letters came to Papinville with this spelling. For years the sign on highways B and N were wrong. The Papinville Association got the right spelling on the signs, plus put on the Missouri map in the early 1990’s.

Papinville streets were laid out very wide to what they are today. Main Street and Market Street were 85 feet wide running east and west. Green Street, which is to the north of Main, and Swan Street which is to the south of Market Street, were 65 feet wide. Water, Middle, Court and Prairie Streets ran north and south. They were 60 feet wide. On the west side of Water Street was Government Boat Landing ,running along the east side of the Marais des Cygnes River. There were alley-ways in the middle of each block that were 20 feet wide. Each block had 8 lots.

As Papinville grew a second addition was added. The land was given to the town by Andrew Jackson in June 1868. This was after the Civil War and people were moving back after everything in Papinville was burnt due to Order 11. There were  six blocks added. The north and south streets names were Finley, Jackson and Lane each 60 feet wide. The east -west streets were continued as Green, Main and Market ending on Lane to the east end of Papinville. Today Papinville streets are

much narrower than what they were in the 1840’s.

The oldest plat we have found on Papinville was 1889. When the town was platted a cemetery and school properties were designated. The one room school is still standing on the museum property with the original furnishings. The only changes on the town roads has been the new bridge which was built on the Government River Boat Landing at the west end of Main Street in 1996. The old wooden bridge was deeded over to the Papinville Historical and Cemetery Association the same year. The old bridge was put on the Missouri Historical Register by the Missouri Department of Natural Resources on October 22, 2022. The old bridge was turned into a walking bridge.

Next week the story will be on the businesses of Papinville. You will be surprised as to how big Papinville was, as to what it is today. Hope you are enjoying the stories and that you will come out to our 175th celebration on September 24 th. Plans are still being made and we will be up dating the events as they happen. If you would like to help us in any way please call one of these numbers 417-395-4288 0r 417-395-2594. - Submitted by Phyllis Stewart (Activity Director) Information sources :  Papinville History 1987 (Beverly Sullins and Phyllis Stewart)