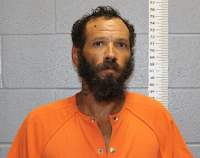 In the early morning hours of September 5th the Butler Police Department along with Bates County Sheriff's Deputies and Bates County EMS responded to a report of a male that had been shot after an altercation in the 600 block of West Harrison Street in Butler.

When officers arrived on scene they were informed that a male in his 40s was shot in the arm and had fled the shooting scene to a residence in the 600 block of Dakota Street near Orange Street.

Bates County EMS and Butler Police arrived at the address on Dakota Street to find a male with a gunshot wound to the arm. He was taken to BCMH and treated for his injuries, He was later released.

A male who resides at the 600 block of Harrison address was identified as 37 year old Joshua Leon Hawkins. He was arrested and taken into custody without incident.

Mr. Hawkins was charged with 1.) Assault - First Degree and he is currently being held in the Bates County Jail on a $100,000 cash only bond.

More charges on Hawkins are pending at this time.

Disclaimer: Arrest records are public information. Any indication of an arrest does not mean the individual identified has been convicted of a crime. All persons arrested are innocent until proven guilty in a court of law.